↓ Skip to Main Content
Home › New Day › Own Your Power

The last two days of yoga have been especially impressionable, like deep seeds planted within the blossoming of my Soul, my heart’s desire and a very new relationship with my power. There is an essence present, lingering in a very different, palpable atmosphere and I have felt that essence taking up residence within me these past few days. The mind is still very much present and not about to give up its awareness, even allegiance to old stories and memories… and yet, we ARE remembering and we ARE learning once again, to identify with and FEEL OUR STRENGTH, OUR CENTER, the NEW DNA of a CHRIST SEEDED identity and the urge of existence to BE MORE.

I am sharing with you today, Virabhadrasana II, otherwise known as the Warrior II Pose. This is like a full body mudra 🙂 One cannot help but feel this new center, strength and power that is lingering in the atmosphere presently when taking this position. Along with the image, find below the story of its origin, as well.

Yes, something vast and full, inspiring and wise is communicating more directly with this humanity at this time. It occurs to me that perhaps it is us, that we are at long last more clear and have a more lucid connection with our truest nature than in times past. Then again, perhaps it is the God of our being, seeking a new level of co-creation with ITS most cherished creations! Perhaps we are ready to give up the notion that someone or something other is coming to fix things and clean up the chaos of a once unconscious species. PERHAPS, we are reading to align with a power that already sees to the otherside of the chaos and is finally ready to identify with the greater truth of who we are, with the peace and love of who we are.

Regardless, something very new is in the atmosphere, the energy swirling all around and within us. And it is beckoning us into more. Own your desire, beloveds, own your power and own the greater truth of WHO YOU ARE. Pay attention to the way this power is expressing itself in your everyday reality, your known and the routine of who you are. It is seeking a new residence and as you allow and embrace its presence, your life will mirror more and more a very new relationship with power! 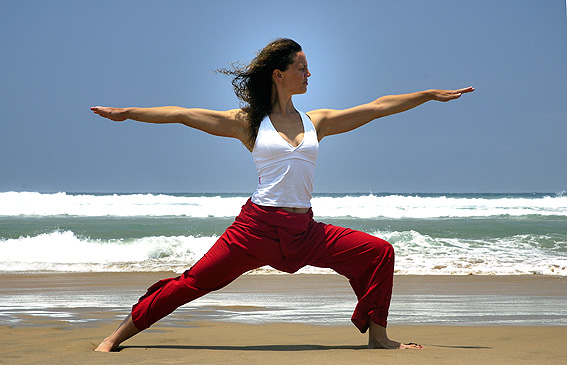 According to Hindu mythology (specifically the Mahabharata), there was a certain Lord Shiva who loved the daughter, Sati, of his enemy, Daksha. Daksha refused to accept Shiva, even when Shiva and Sati were married. This animosity between Sati’s father and husband upset her so greatly that she killed herself.
Distraught by his wife’s death, myth tells that Shiva created the fiercest warrior from a bead of sweat on his forehead. This warrior’s name was Virabhadra, and Shiva set him out to destroy those who had caused the death of his beloved Sati.
In Dr. Svoboda’s dynamic book The Greatness of Saturn, he describes Virabhadra as looking “like a flaming fire, having many heads and many eyes, and tens of thousands of arms and legs. The embodiment of concentrated might…”
The fiery power of Virabhadra takes form in three different Warrior poses, this being the second. So, each time you perform Virabhadrasana I, II or III, think of the mighty conqueror from which your posture gets its name. Feel that and try to embody it.

4 comments on “Own Your Power”