I am being called to the Shining Ones Vortex more frequently now to prepare for the Fall Equinox. I had this magical experience yesterday up on the highest ridge that I share a bit of below. It was an energy overlay that I was attuning to – after the video I still had about an hour or more of distance to go so I had time to contemplate and feel the energies in this video in more depth. The jest of the intel is that though every human on this planet has both an anima and animus, a female and male quality or essence, due to the extreme density and control mechanisms in place, the masculine has been the dominant energy operating within the human form regardless of whether one incarnated in a male or female body. Think deeply on that. 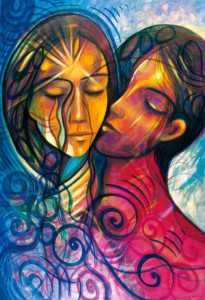 And what was coming to light atop this pristine peak as the winds blew with clarity and peace on the mountain yesterday – I could see the “new female” humans standing with a “new male” counterpart just behind them. This is both metaphoric and literal in symbolism – meaning as we balance the masculine and feminine within, new relationships will form and there will be greater harmony in our world in all types of partnership! There has been tremendous shift around this new balance in just the last couple of months. The masculine energy has led for so long – vibrating drive and achievement, control and power for powers sake, intellect and reason over heart and the feeling nature, etc and it is for the feminine energy to take on new roles of power and insight, leadership, instinct-based decision making and demonstrating freely the power of Divine Love.

Much of our planet’s imbalances right now are a consequence of the extreme imbalance of the masculine to feminine, and those in a female body must accept responsibility for this seeming usurp of power. Nothing has been taken away from, we have allowed the imbalances as much as being obligated to them. But this is a New Day and a New Time and there are very new roles and responsibilities for us all to embody. This rewrite of the consciousness around masculine and feminine roles and energies is another level of the multidimensional merge sequence underway. I sense at least one if not two males contributing energy to the New Human Equinox Initiative this Fall – you know who you are. The Shining Ones also urged me to convey that I will be channeling energies specifically for this event – new intel and insight and especially so, new energetics on behalf of those gathered and the peaceful transition of our beloved Earth Mother. Exciting and Blessed times… do consider joining me.

With the Love of Oneness,
DeAnne