I AM sure you are experiencing profound moments of insight and deepening in your journey and reality. The vibrational world is lit up with fractal energy and crystal essence, inviting us into revelation and truer alignment with new dimensions of time and space. 5th World is vibrating strongly and portals are everywhere open and easily accessed. It is a magical time and the acceleration continues as we settle into this passage between the Summer Solstice and Fall Equinox with the last of the Blood Moon Gates.

Yesterday was another of those unassuming days when the known reality quickly shifts into Mystery, asking for expanded perception and open awareness. We went to visit some local falls, new to us, and decided to forgo the main trail and bushwhack our way down the side of a mountain pretty far down stream from the falls. 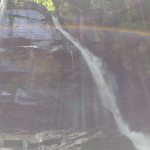 The idea was, once we reached the river, to use its path as our guide back up to where the falls were. This whole scene was magical and beautiful and about 2 hours of effort, but at last we reached this spectacular 100 foot waterfall.

We played and climbed and rested around and under this waterfall 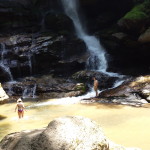 for almost an hour – and feeling filled up, decided to head back to the main trail. We asked the handful of people who had come to the falls while we were there how they had gotten there, knowing they didn’t do the same extreme cavorting we had decided to do! They pointed to a nearby trail, fairly steep and rocky, assuring us it led to the main trail. This was a relief as the alternative, retracing our route, would’ve taken hours at best.

Up we all went – happy to be heading back to rest and dry clothes and food! After just 10 minutes of climbing, the trail ended abruptly! The options were a 50 foot drop into wooded nothingness or a 20 foot

rock wall with a single rope hanging down the center!! We were standing there a bit stunned, clearly we couldn’t climb that wall with a dog?? Question marks danced in the atmosphere over all of our heads!

About this time a young couple came up the trail behind us, we asked if this was the way they had gotten down to the falls and they affirmed the rock wall as “the trail.” It seemed an impossible situation. Bodhi is agile and quick on his feet but this was a VERTICAL WALL with very minimal shelf like indentation. The rope was the leverage – I was not seeing it – yet Jim kept saying “we will get him up that wall.”

Bodhi started to whimper a little – he is smart, he saw where he needed to be and the dilemma at hand. The 2 young people that had come up had some strap and carabiners and looking at the simple backpack we had – suggested creating a makeshift harness to lift Bodhi up! 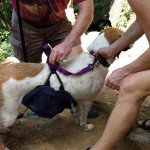 He was very patient as we attempted to craft this rudimentary solution to a BIG dilemma! It was such an opportunity to stay IN the moment and out of the mind, out of what if and worst case scenarios.

Jim decided I needed to go up the wall first – and he would kinda guide Bodhi and lift him to me in various stages… this plan quickly went south as there was NOTHING for Bodhi to balance on and the pack was precarious at best. With me half way up the wall, Jim just picked 65 lb Bodhi up, grabbing the rope with both hands and began climbing. Every time they got close to the 3 inches of nothing I was standing on with one foot – I would reach down and help to pull up on the harness – then climb a little higher and repeat the sequence. People above the wall and people below the wall watched with me, as Jim’s arms jerked with the gripping and climb motion and his body swayed from side to side with the weight of his passenger. It was a long 5 to 7 minutes as this scene played out!

Yet, all the while, this miracle unfolded, a light infused moment that became this beautiful teachable one. From the second Jim picked Bodhi up until he was up and on solid ground once again, this 4 legged being did not flinch, didn’t make a sound, no signs of panic or stress. He completely surrendered to the moment – with a level of trust felt by all. It was an exceptional experience and both our little tribe of 4 and the greater tribe that had gather to watch – were touched by this effort and outcome. 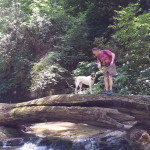 The experience remains with me – the energies so palpable with presence and light. Easily this deepened the bond between Bodhi and Jim – but there was a deeper reflection and gift to be had. The opportune moment begged the question I extend to you here… “what level of trust do you possess, who or what do you attribute that trust to, is this trust something that emanates from the strength of your own center, independent of circumstance or other – or is it a trust that is dependent on certain persons yet not so confident without them, how deeply is your surrender in relation to your experience of trust?”

In Bodhi, in that moment, we all experienced what it is to LET GO – truly, to turn it all over and TRUST unconditionally. It was really magical and moving, even as it was harrowing. We all just focused on the task at hand and “moved without thought” until we achieved our objective. Jim kept saying to him, “don’t worry buddy – I’m going to get you up that wall!” And that he did! One moment we were in uncertainty – the next moment, we were free. All was well. The minute Bodhi discovered he was on flat land again, his utterly still demeanor shifted to his nose and he ran right over to someone’s lunch bag laying on a rock! Another example of living in the moment – letting go and moving on – living free!

In this NOW, no matter what you are doing, where you are or what comes up, there is grace. And in that grace, solution to seemingly insurmountable moments. This is the nature and promise of love – a love that never fails. (tap on pics to enlarge ;)) 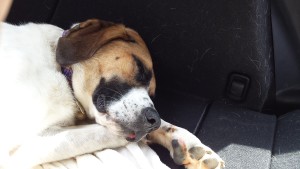 3 comments on “Reflections of Trust”