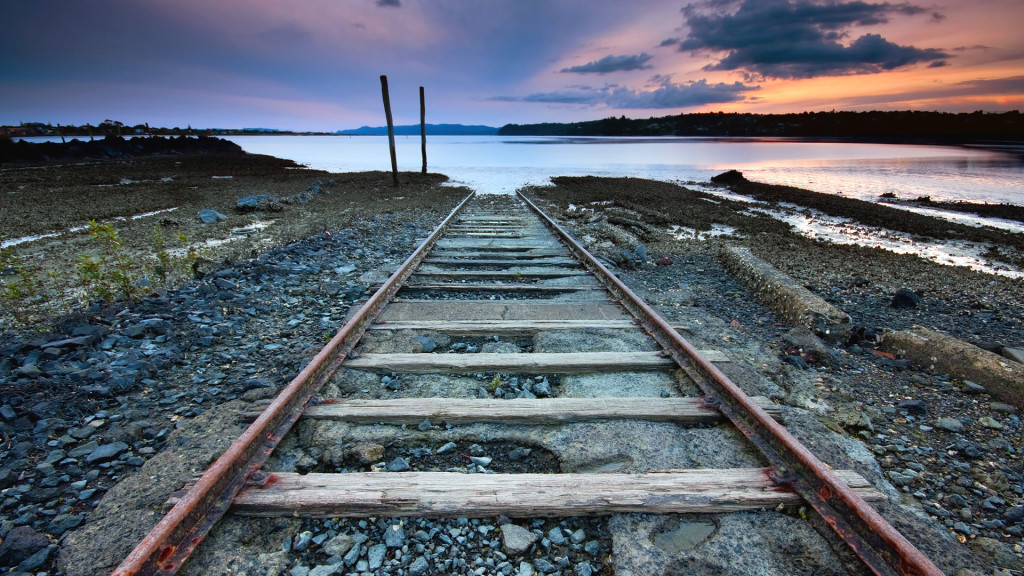 I often wish I could draw here in this space, like a white board component on my blog page. My high mind is continually filled with visions from the vibrational world, symbolism to convey certain and significant energetic passages. Until I discover a technology that can shapeshift images from my mind to paper, we will work with the current option of photo images that serve the same purpose.

This truly awe inspiring phenomenon is happening where we have the opportunity to jump to a new track of existence! I invite you to really tune into this image above, listen for the sound, it is there and it is a pure tone, for sure. Notice that this is not a broken track, a piece missing and then the same track resumes at a distance. That would be an all together different energetic. The message this image helps to convey is completion with certain constructs of identity – be they relationships, careers, locations, beliefs, perceptions, identity traits… the higher realms and just an overwhelming frequency of love is collaborating through the circumstances of our lives… a moment and time of completion. And even if the circumstance feels abrupt, harsh, shocking or even painful to the identity aspect, ego consciousness ~ the greater process is one of wisdom and inexplicable expansion for our species. After all, completion, a door closing, a phase coming to a close also reflects new beginnings, new opportunities coming into view… the birth of something new.

As with this photo, certain phases, eras, agreements and lineages within our human experience have come to an end. Yes, this has already occurred energetically ~ and for the last 3 years we have been catching up so to speak, adjusting to a new order without knowing what the rules are. Disoriented and flying by the seat of our pants has been the new norm for a while now. But this year, the new world and our role in it, is becoming more concrete, the new potential is anchoring and merging into the spaces we now occupy, more and more each day.

Another thing I love about this photo is that the old tracks, end at the edge of water ~ water is a metaphor for consciousness. It is from this place, this moment and the details of our lives that we move into a new and greater consciousness. And what I’ve seen and the shining ones have communicated to me is that the new tracks of our lives and purpose and existence will not in any way be related to the ones we’ve been traveling on, individually or as a species… be still with that awareness, really breathe it into your Soul. Again, Divine completion is at hand. Metaphorically, looking into the image here, the new tracks may appear to the far left and miles over the horizon, they may appear to the right and not be tracks at all, but a super highway or perhaps a rainbow bridge encoded with a new living language for the journey ahead.

This is the invitation nestled inbetween two powerful eclipses as we open ourselves fully to this magnificent Spring Equinox Gate of 2016. Wherever you are, whatever you are doing, if you are aware of your light and create a space for sacred intention today ~ this Equinox will imbue your thoughts, your decisions, your desires and your love with great power for the future. I have felt exuberance leading up to this day, much like a child anticipating Christmas morning. I don’t know “why” I AM happy and thankful and excited, I just know that there is something really significant unfolding ~ and that this Equinox time is a threshold that will illumine the days and months ahead. I encourage you to take time to explore and be with this Equinox, give it your intention and attention, do something new, different, out of your comfort zone… ask something more of your Self on this day and more will be given and revealed to you in return.

It is no coincidence, as nothing is, that the primary for the Presidential Election took place this last week, right before this Equinox Gateway. No matter what is outpicturing in the 3D zone on the backdrop of so much separation and masculine control, there are spiritual influences, overtones and pathways of opportunity for the choosing. I spoke a little about the role Donald Trump is playing in this current passage on the 2/21 transmission of The New Human ~ (https://deannehampton.com/webcast/webcast-2016-02-21/) I AM guided in the power of this Equinox energy to shine a little more light on what is unfolding.

Donald Trump is showing us what is not yet healed ~ an amplified version ~ giving people an outlet for anger, outrage, the absurd. The world we live in today is a divine consequence of a people giving away their power and the revolt of a long history of suppression. This is what we must wake up to. The Occupy Wall Street movement was a start – but turned into a state of not enough/too late and again, was diverted by those in false power that we have allowed. Donald Trump’s persona on the world stage really demonstrates what needs to be healed in us – as a people, as a nation. If you have emotions around his presence versus a neutral observation of what is ~ there is more inward attunement and deepening called for in the individual – you – which then serves to heal the collective.

I actually feel awe and wonder (not thought and not emotion – but in my feeling nature) awe and wonderment at the wisdom and love around his presence at this time. As the Light expands in our world, no thing shall remain hidden – ESPECIALLY the dark and unpalatable still lurking within humanity. Donald Trump reflects extreme energy, he is an amplification of how absurd and out of balance our government system is. Expressing negative energy in any way toward what is happening “out there” in the circus that is 3D, feeds what is already so out of balance. We must behave in new ways, as a people who have power and wisdom – we must begin to get in touch with, in a very personal way, what we have lost touch with as a humanity, the value of the human spirit that is worth fighting for.

Enter in the new Michael Moore movie, Where To Invade Next! A brilliant movie that everyone should see, especially at a time when the worst of what it means to be human is so sensationalized in our country. This movie is a recipe of promise, of potential, of what is possible when people stand up for their rights and demand justice and equality when the “powers that be” try to manipulate the laws that were meant to protect all. It was astonishing to learn that many of the things that are working in other countries are based on a foundation of our founding fathers…  that “all human beings are born free and equal in dignity and rights. They are endowed with reason and conscience and should act towards one another in a spirit of brotherhood.” Indeed, dignity is a constitutional principle. I cannot begin to express the love and intelligence and heart of this movie, but I did feel a flame of clarity lit from within – one that exquisitely empowered the very consciousness and energy of SELF we need to be standing strong in, in this NOW.

Donald Trump is not the enemy – he is demonstrating how far we have strayed from our humanity. If he becomes the President elect, it will be in divine order and we must allow the consequence of his election to play out with trust and neutrality. My DeAnne aspect relays this to you with a lump in my throat… as in, “wow, will we really go down this rabbit hole as a people?” But I trust the Light. I know that everything is spiritual – that the higher realms intelligences see everything from a much more vast perspective and that the evolutionary momentum is always to get us to a higher potential as a species. When we evolve, the whole Universe evolves. We get to decide when we are ready  – we are always empowered to choose differently than we have in the past.

Clearly there is a lot of work yet to be done – but that work is still primarily within. Inner work illumines the mind in new and powerful ways ~ then you are no longer angry or disheartened ~ we simply continue to light small sparks of positive change in our own lives that will inevitably tip the balance back to compassion, wisdom and human dignity for all. I have insight as well around the potential of Hilary Clinton’s presidency… there is time for that. For now, in the immense, golden radiance of this Equinox Gateway, the clear seeing and wise among us will create a space of LIGHT for this spectacle within our ascension process as a species. Shine Light over Washington, see it as a giant, golden orb ~ and if there are any thoughts, actions or emotions at all concerning any party or candidate, come from a place of divine neutrality – this calls the higher forces in and allows for new creations while trusting the process as it unfolds.

I want to leave you today with a beautifully empowered mantra to surround yourself with in this NOW Equinox moment. Om Mani Padme hum ~ it is the intention for wisdom and compassion in all things, for all peoples, at all times. May we embody its essence and live this wisdom today and going forward. Namaste New HUmans, with love.