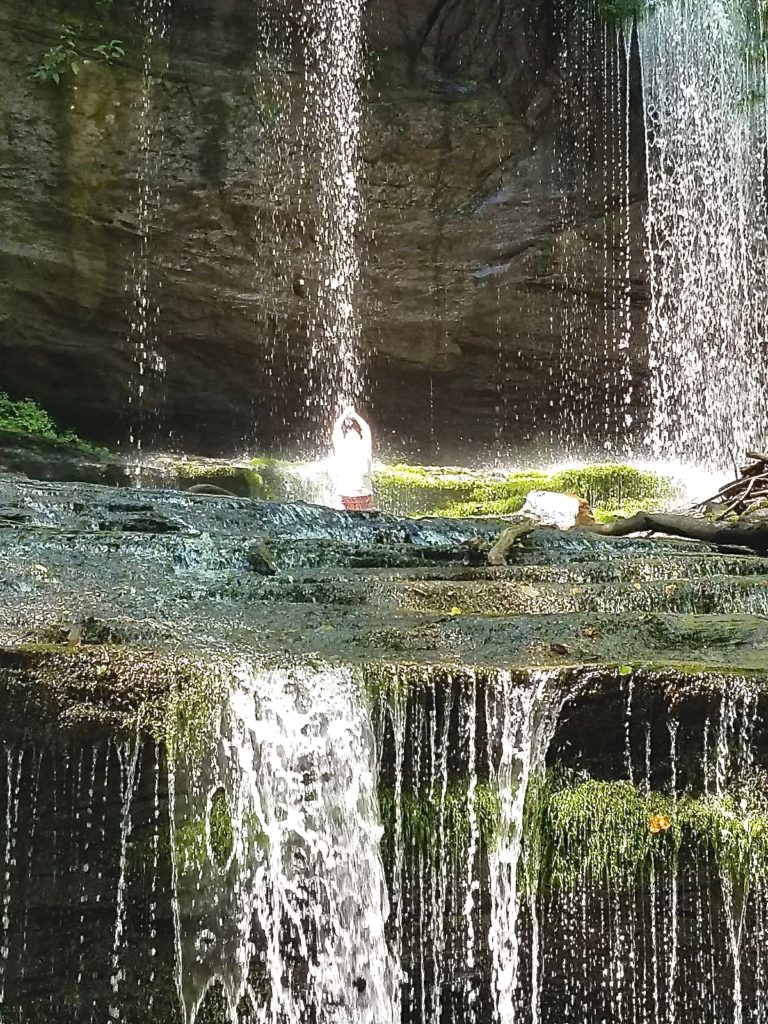 In the magical, mystical worlds of this time of being human ~ I had no idea what I was truly participating in, in this moment above. In the world of form, what you see is not an optical illusion ~ there are 2 tiers to this waterfall – I had climbed up and behind the bottom tier and was guided to marinate myself in the glorious cascade of the higher falls. The sun was beaming so brightly and directly on me and the waters. It felt as if I was in a place where everything was pure white radiance, the brilliance seemed to be directly illumining my mind while the crystalline showers created a sense of utter, otherworldly, bliss.

This photo was taken a couple of weeks ago near Asheville – fast forward to this now and the very persistent light intel streaming in regarding the August Eclipse. Many people are asking me about “events” for this eclipse. Many want to know what to do, what I am doing, how to best utilize this extremely rare, deeply esoteric and metamorphic eclipse.

As I shared on the July 16th webcast, Apex Of The Heart, Choosing Love ~ https://deannehampton.com/webcast/apex-of-the-heart-choosing-love-new-webcast-716/ the two retreats scheduled for September are specifically designed to assist with the vibrational changes expected during this event. This eclipse will be yet another powerful turning point for palpable external manifestation of what is occurring with the higher light. In this same webcast, the light intel was equally strong that we, as Divine New HUmans, must expand our thinking and dreaming of what is possible in this NOW ~ which is directly speaking to our manifestation capacities. So, stay with me here and feel these golden threads that are weaving together on behalf of our ability to resolve old stories and old timelines so we may move fully into Unity without restriction.

Back to the photo above ~ the August Eclipse is a metaphoric and mystical event… this photo expresses both of those energetics. There is strong and clear guidance that this eclipse is a very personal event. The imagery I keep seeing is a giant shaft of light, tubular, golden radiance, between the Cosmos and Earth ~ pouring forth crystalline activity. This eclipse energy will allow each individual in our own way and space and intention – to turn inward and access the core of ourselves, our heart, our Divine connection to the Divine Infinite and the New Timeline realities. What really matters is that you are in a place of peace, a place that brings you joy and allows your energy to be relaxed and your heart open. The eclipse energy will have a very purifying, mystical effect – and quite honestly – anything can occur. Often times when we are in ceremonial gatherings – the focus, though sincere, is focused in the world of form, on following ritual, listening to someone else, intent on doing and participating – but not necessarily be-ing. Does that make sense?

This eclipse is a very personal initiator and activator of ancient encodements, structures and intentions… all the while simultaneously lighting up the New Earth/Crystalline Grid Networks. Take a moment and glance back at the photo above?? In it, there is nothing else but a tiny human and the immense beauty and grandeur of the Earth Mother. The human does the only thing she can do in this moment ~ lift her heart and being to the crystal radiance and brilliant light pouring over her. This moment is undeniably purifying and mystical – old stories and timelines mystically washing away with her sole/soul devotion to the moment at hand… a moment of complete Unity, Divine Merge, Crystalline Embodiment within which the Higher Realms unify with us to create a clearing of timelines, akashic, memory and emotions that in any way hinder our magnificence.

This is the purpose and gift of this August Eclipse. It is also a time when our challenges and shortcomings may be exacerbated – already the August energies in general are stirring the pot of our mental and emotional bodies – bringing anything and all to the surface to be witnessed and repatterned by new levels of awareness and power. Addiction, addictive tendencies, seeking more comfort foods, feeling depressed or that you just don’t like anyone very much – the feeling of being a boat that lost its mooring and is adrift in some pretty turbulent seas… these are just a few consequences of extremely high and intent lightwaves butting up against the small self and old patterns. Awareness of Self is KEY – don’t freak out or beat yourself up. Stay in the moment – each moment, brand new. If you have a bad day or days – keep rebooting with activities that you know elevate and soothe you, stay true to your daily spiritual disciplines, be fierce about returning to balance. We have worked diligently with the message of completion for a few years now and that activity is peaking with the bifurcation of timelines underway. (This was explained in the 7/16 webcast) We are now on the Path of Totality – moving toward greater unification with the Earth Mother – Gaia is expanding her Solar Self in unison with our expansion and amplification of the New Earth Grids. I love that the photo reflects the crystalline energy raining down and into the crown chakra  – pouring through the body temple and continuing from human into Earth. There is an incredibly beautiful and intense connection between her higher dimensional crystalline core and that of humanity. Keep your intention pure and follow it through with action – action based on your Divine human identity!

The August Gateway passage opens on August 3, includes the Lion’s Gate on the 8/8, the Total Solar Eclipse on August 21, and extends until August 25. This wave of Light assists us in dissolving realities which do not serve the collective highest interest. As new hUmans, we recognize that this Earth-Moon- Sun alignment is not about the moon blocking the SUN, it is about the SUN’s full glory being revealed. In the simple joy of being called up to the altar of this moment above… there is the energy of the Mother, Divine Feminine beckoning me to my coronation! Please take all the metaphor herein to heart – this is one of the most direct ways the Higher Realms communicates with us… and this eclipse is Metaphoric and Mystical with the divine intention of Activating the Solar Crown of Christ Consciousness in our world and in our hearts. It is time, this is the moment, to realize the light-encodements within HUman DNA that hold the possibility of ascending to Christ Consciousness on behalf of a greater Cosmic Unity.

This is our world, this is the experience we have chosen… which is why even though our experiences within and without seem to grow increasingly bizarre, often leaving us in a state of numb… still, somehow, we carry a sense of deep and abiding peace. Be wherever you are guided to be on August 21 beloveds… there will be millions traveling and on the move during this time so tune in now and know your optimal place. I offer this image as a visual guide in allowing and being anointed by the gift of this eclipse ~ let this be your coronation new human, your crowning moment. No matter where you live or what you do, tune in to receive and transmit as One Love, One Freedom, One Truth. Know that we will be unified in our intent for the highest interest of all concerned ~ that all may know peace.

I will leave you with a few significant dates to begin truly focusing your highest potential through the coming months. We will explore these dates further on the August New Human Transmission. For now, may nothing else be more important – may there be no limit to your commitment, conviction, courage and catalyst experience from this moment forward.

We Are Oneness Rising ~ Embrace This Time,
DeAnne and the Shining Ones

Sunday, July 23 – Last New Moon (5:36am eastern)before the Eclipse – which is also a New Moon.
New Moon’s are always about reset – a planting of seeds, allowing your heart to flower in its desire, its wisdom, its power and its love. This New Moon is specifically about balance and power. Breathe in ALL IS WELL, Breathe out FORGIVENESS, Create space for GRATITUDE.

2 comments on “Crystalline New Earth, The Gifts Of August”