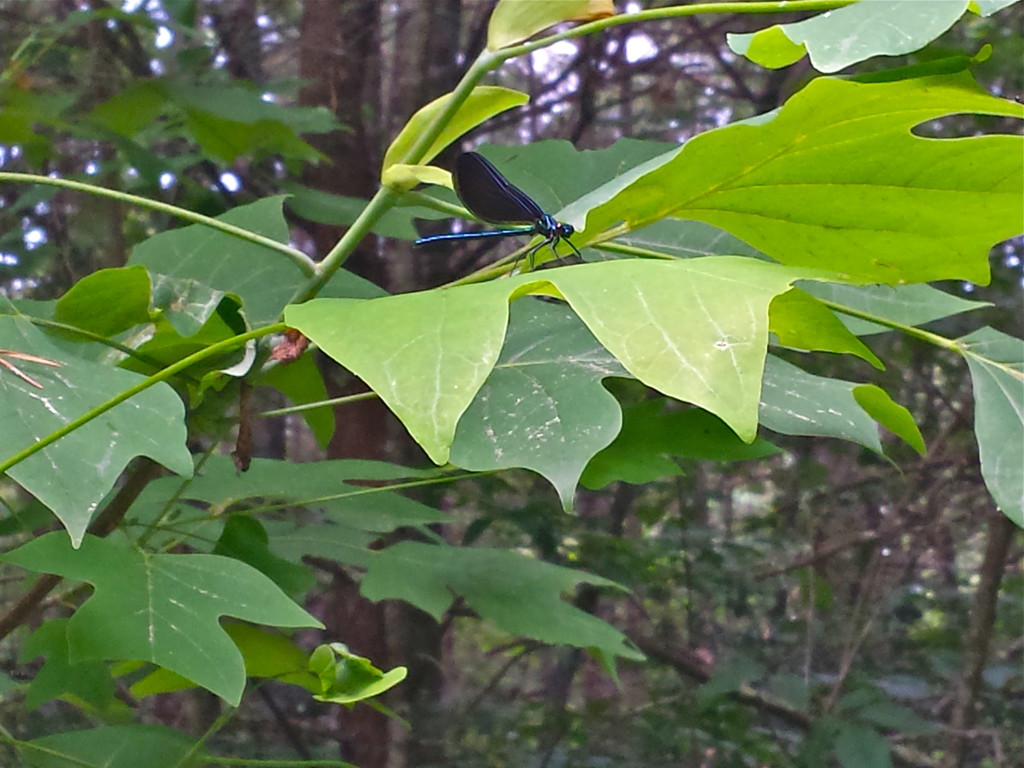 I was in the woods yesterday with Bodhi and Levi, a little red-headed 2 year old who has adopted me when it comes to time in nature. We were loping along, kid and dog running random patterns on the trails – when a pair of damselflies began dancing across the path in the direction we were headed. I called out to Levi to come look, when one of the delicate blue creatures decided to land on a leaf just off the trail. “Where DeAnne”? came the excited voice of said child, even as he barreled up to where I stood with rambunctious enthusiasm. I attempted to use my voice to calm him into a gentle observation of the damselfly as we drew nearer and nearer to where it lay, peacefully perched on the same leaf it had landed upon. The questions ensued while I attempted to simultaneously point and get out my camera. We must have stood there being everything but still and quiet for at least 5 minutes – talking, gaping, reaching, squealing, jumping – “I can’t see, closer DeAnne, closer”… and still, that damselfly sat unmoving. It seemed to know it was not in danger and took advantage of the moment to bask in the tranquility of the nature it was surrounded by.

I thought about that damselfly the rest of the day on and off. It occurred to me what a deep state of trust it had, in itself, its surroundings, in existence and the moment it found itself in. Trust is an instinct, inherent and unerring. And be it animal, human, winged ones, crawly ones, big or small… everything under the sun and a part of God’s Kindgom carries within an innate sense of trust. Trust that we are connected to something bigger and wiser, that watches out over and is always with us. Somehow this delicate creature of the beloved knew it wasn’t in danger and offered us a simple moment of remembrance, grace, trust and Unity.